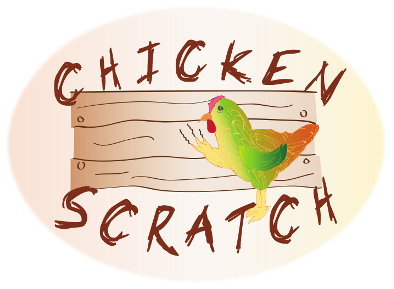 Goldie was obsessed about finding out what the four little chicks eat. This afternoon we were all in the garden digging for worms when she announced that she had a plan to sneak into their coop and take a look at their food. We hens—Sunshine, Peanut, Goldie and I all waited in the bushes until the chicks left for their afternoon dirt bath. While they lazed in the sun, Goldie ran through the tomato bed and crept up the ramp to the coop. She immediately saw their food bowl, waddled over and took a bite. As we all watched, she took another bite and another. Soon she was face first into the feeder gobbling the food.

We were lost in the moment when a long, dark shadow slowly moved across the door. Oh, no. Mama! I wanted to scream, “Run!” but nothing came out of my beak. “Goldie! Why are you eating the chicks’ food? Out!” she cried.” Goldie froze so Mama took the feeder and helped her out of the coop.

I figured that as long as Mama was there I would ask her why the chicks got different food. She told me that babies eat a ground starter meal that is high in protein for growing and medicated to keep them from getting diseases like coccidiosis which can kill them. Mama said that chicks can’t eat our big girl food because it has lots of calcium in it for laying eggs and that would damage their little kidneys.

Mama asked if I had any other questions, gave me a nice scratch and went back to work. I told Goldie what I learned and she felt bad that she ate their food. “Hey, Brownie—it tasted really good! Maybe I’ll grow.” I didn’t tell her that she was already big enough and didn’t need to grow anymore. 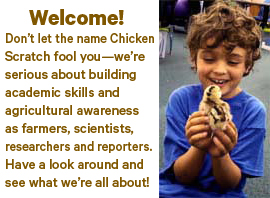 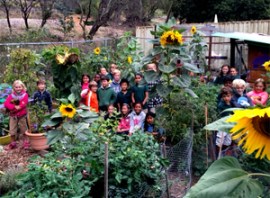